By far one of my favorite places in Yuzhno-Sakhalinsk  also happens to be quite close to our apartment, and relatively easy to get to (although the legality of going there is debatable). Near the city’s major park, Gagarin Park, there is a very tall ski jump on hill/mountain connected to the Gorny Vozduh Ski Park Complex.

We first heard about the ski jump in spring, once all the snow had melted, and no one was skiing on it anymore. Some of our students had gone there and taken some pretty amazing Instagram pictures. A few weeks later, as we were walking to Gagarin Park, we looked to our right, and there it was, in all its glory. That day, however, we decided to hike past the ski jump, and explore the forest and mountains. It wasn’t until walking past it several times that we decided to finally climb up to the top.

We waited for the evening, hoping to catch a perfect sunset, took the bus to the Slava Square stop, and walked over to the ski jump. Making sure no construction crew was around, we walked on to the premises and hiked up. Although it’s a short climb, the incline is very steep, and so I was out of breath almost immediately. Feeling like I was going to die from either exhaustion or thirst, we took a break at the half way point, where even this view proved to be beautiful.

Wondering why I decided to do this…

A little bit past the halfway point 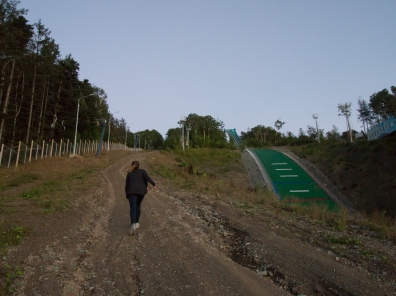 So tired… so thirsty…

View at the half way point

Once we reached the top of the hill, I took another quick break to catch my breath and say a short prayer before we got on the actual ski jump itself. I quickly realized why there was a construction crew present during the day… the old wooden ski jump did not feel like it was the most stable structure. But climb to the top I did, where I immediately sat down to catch my breath and to get over my immediate fear of being up so high.

After a few minutes to relax, spang and I cracked open a beer and enjoyed the sunset. Unfortunately, we had gotten there a little late, so the sun had already almost set, and it was a cloudless sky with not much color to it. However, the clear sky proved fortuitous within a few hours. We waited for night fall and the stars came out to give us quite the show. We spotted several constellations, satellites, planets, and even a few shooting stars.

Also, we were not the only visitors to the ski jump. It is apparently a fairly popular place. A few couples and groups of friends came and went while we were there. One group of men even drove up to the top of the hill (saving themselves a lot of grief), and brought up a hookah! I wouldn’t have minded smoking some shisha while watching the sun set either!

Although we were able to go one more time after this, my only regret is not going there more often while I had the chance. The top of the ski jump is a great place to watch the sunset like a local, and feel on top of the world.

This is a text widget, which allows you to add text or HTML to your sidebar. You can use them to display text, links, images, HTML, or a combination of these. Edit them in the Widget section of the Customizer.